Works by Bach, Dupré. Franck, Widor and others

Stephen Hamilton, virtuoso concert organist, has long been prominent on the American organ scene. Consistent reviews have earned Hamilton acclaim as a thoroughly engaging artist, and a much sought-after concert personality. FIRST MUSIC opens its 11th season celebrating the 333rd Anniversary of The First Church of Nashua with a tour-de-force on the 4000-pipe historic Anderson Memorial Organ: Austin Organs, Inc. – Opus 1406 from 1926. Come hear the majesty of this magnificent symphonic instrument, in a program-for-all-ages, with well-known works, and some surprises in store! Underwritten by the Huber Family Trust. 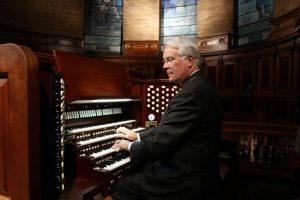